Maryland Office for Refugees and Asylees

About The US Refugees Admissions Program (USRAP)

The President, in consultation with Congress, determines the annual ceiling for refugee arrivals through the U.S. Refugee Admissions Program – this is called the Presidential Determination. The total limit is broken down for each sending region of the world. Over the last few years, admission ceilings have ranged from 18,000 to 125,000. The Presidential Determination for refugee admissions for Federal Fiscal Year 2023 is 125,000. However, in FY 2022 just over 25,000 refugees were resettled in the U.S. This does not include asylees or humanitarian parolees nor any other special populations.

Refugee admissions are determined based on consultations with stakeholders and Resettlement Agencies, taking into consideration their local capacities as well as economic conditions, availability of housing, public transportation, jobs, and other resources for new groups. Resettlement agency USRAP services are governed by their cooperative agreements with the U.S. Department of State. While MORA administers programming to provide support services, financial and medical assistance to eligible refugees, the state has no role in federal USRAP processes.

Once approved for resettlement through USRAP, refugee families undergo medical exams. Once all security and health checks are complete, refugees are scheduled for travel to the United States. They undergo placement through a local affiliate of a national Resettlement Agency, at which point they begin Initial Reception & Placement (R&P) processes and transition to their new lives in the United States. This is further illustrated by the graphic below: 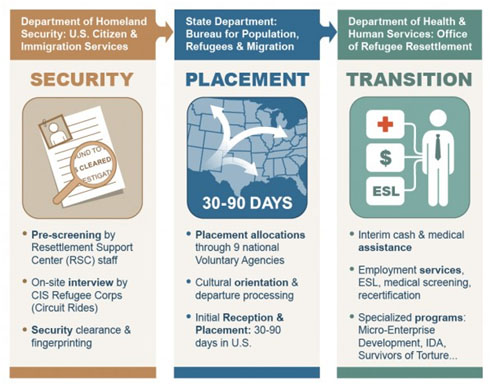 What is the difference between refugees, immigrants, and asylees?

Refugees are forced to flee their homes and seek safety in another country, often times without warning. Immigrants make a conscious decision to leave their countries to seek a better life elsewhere. While immigrants may return to their home country, refugees often cannot.

Refugees apply for protection while overseas and enter the U.S. with approved refugee status and documentation, while asylees request protection and may be granted asylum only once they are within the U.S. Asylum seekers request asylum upon entering the United States or traveling to a U.S. port of entry. Asylum seekers must apply for asylum through U.S. Citizenship & Immigration Services (USCIS)

How does the U.S. determine if a refugee is eligible for resettlement?

Applicants for refugee admission to the U.S. must satisfy the following criteria:

Although a refugee may meet the above criteria, the existence of the U.S. Refugee Admissions Program does not create any entitlement for that person to be admitted to the U.S.

In determining each applicant’s request for resettlement, an evaluation is made whether for the applicant may be qualified for the 3 internationally accepted durable solutions for refugees:

Most refugees and displaced persons return to their communities when peace and stability return to their country. When conditions in countries of origin remain unstable or there is a danger of persecution upon repatriation, some refugees are able to stay in a refugee settlement in another country. Resettlement in a third country, such as the United States, is the last option, and is available to only a tiny fraction of the world’s refugees.